Photos from the 2013 Women in IP Networking Dinner in Seattle 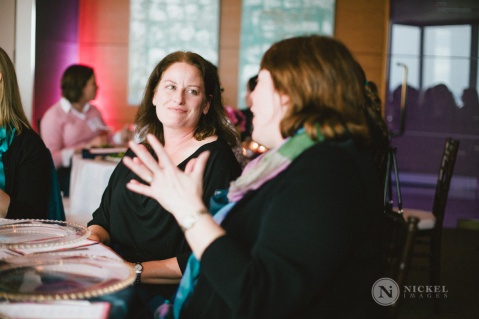 An E-Reader’s Review of “Persuasion” by Arlene Dickinson

It is an easily supported premise that there are many successful American female lawyers and businesswomen that have penned remarkable books. I have had the immense privilege of reviewing a few of them for this blog. This time though, I decided to venture a little further afield – north to Canada, to be more specific. Arlene Dickinson is CEO of a Canadian marketing company and is most well known for her role on Dragons’ Den (the Canadian equivalent to Shark Tank). Dickinson’s book “Persuasion” is an informative and enjoyable read that puts her climb from her father’s couch to the top of the Canadian business landscape under the microscope.

The full Arlene Dickinson is on display through this book as she recounts her start as a recently-divorced woman with a highschool education trying to get custody of her four children. Her success is largely based on her skills in persuasion. But she quickly draws an unambiguous distinction between “Principled Persuasion” and unethical manipulation. She so strongly believes in this distinction, that a good portion of the book is dedicated to teaching the reader how to avoid being manipulated themselves.

Dickinson then goes on to set out what persuasion entails in her mind: honesty, authenticity and reciprocity. What creates interest and diversity in her writing are the various viewpoints from which she approaches her teachings. She discusses persuasion as she used it to rise in her career. She discusses persuasion as she still uses it to pitch to clients. And she discusses how others try to persuade her. She seems to spare no intimate detail in her real life “messy” experiences to support her opinions.

We all need to persuade people, from our bosses for job assignments to our kids to do homework, and Dickinson’s teachings are universally applicable in various scenarios. That being said, Chapter Eleven is dedicated to persuasion in a professional setting. Dickinson starts the journey at the very beginning: how do you persuade someone to even let you pitch (pitching can be a client pitch, a job interview, etc.)? Once you’re in the door, how do you persuade your client/potential employer/current boss? By reflecting honesty, authenticity and reciprocity combined with factual evidence, Dickinson believes you can put your best self forward.

In my opinion, one of the best teaching tools in this book is the use of examples that contrast one another. In Chapter Eleven, she provides one example of a cold call she received that did not persuade her, and one example of an introductory email that did persuade her.

Being a Canadian businesswoman, Dickinson’s narratives are in the context of homegrown examples, such as Calgary and Bay Street in Toronto (rather than, say, Boston and Wall Street in New York). This differentiates the read from other business books and adds a lot of interest. Plus the sprinkles of references to inventors’ pitches from Dragons’ Den are sure to bring a smile to us IP types.

E-reader’s Opinion: Dickinson and her book are worth a spot on your bookshelf in the office. Admittedly the actual teachings of how to persuade are introduced quite late in the book. However the teachings are so rich and applicable, that the late introduction is forgivable. If nothing else, the fresh, personal approach of these business teachings will leave you a little richer in knowledge. If I persuaded you to read this Canadian book, drop me an email and let me know your thoughts…eh?

Your E-reader reviewer is Hetal Kushwaha, Liaison – International Practice, Marks & Clerk Canada. She would like to emphasize that this is just her opinion and it is not intended to represent the views of Marks & Clerk, Canada. She can be reached at hkushwaha@markclerk.com.